The 2009 Super Bowl XLIII  just finished after, by all accounts, a wildly exciting game. One of my family members had a blast watching it and gave me highlights periodically. Those who Twitter sent quick updates nonstop. The excitement was downright contagious, even for this non-sports-minded writer. Records were broken, history was made, and a great time was had by all. (I’m not giving details in case any of you haven’t yet had a chance to watch it for yourselves 🙂 ). 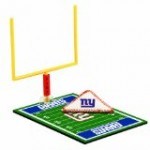 What’s the most exciting part for me? The number of famous and not-so-famous Christian football players on both sides. Wonderful athletes who are able to use these exciting moments as a chance to give God the glory, praise and honor. I thought it would be fun for us to find and read some of the testimonies that have been given recently.

Kurt Warner of the Arizona Cardinals: I enjoyed this article by Snopes. It has the email that has gone the rounds about Kurt meeting his wife in a store where he was working, along with the complete true story that is even sweeter than the email!

Here is an interesting interview with both Kurt Warner and his wife, Brenda. He comments that, “‘When you stand up and say, 'Thank You, Jesus…It is not just for something specific He did on the football field to help us win; it is for everything that He has done in my life up to that point and for everything He will continue to do in my life from here until eternity.’”

These two articles discuss many of the players on both teams:

Aaron Smith gives a touching statement: “'Defensive end Aaron Smith said he relies on his faith and prayers to God, along with a men's ministry book, "The Sampson Syndrome," as his 5-year-old son Elijah battles leukemia. ‘My prayers are thanking the Lord for every minute I get to raise him,’ Smith said.”

This article from the National Post has several interesting quotes and comments, including one by Steve Kearns, a Canadian team chaplain, “"Faith gives you more of a freedom to do the best you can, and to be satisfied with it – even if you lose." Excellent advice. I tell my grandkids something similar. Namely, If you have fun playing the game, you’ve already won!

Which means, no matter if your Super Bowl Sunday team won or lost, if you enjoyed the game, congratulations! You’re a winner! And that's always good news for the Sandwich Generation, from grandparents on down to grandchildren.

P.S. Did you know there are some great books by and about Kurt Warner? Interesting Christian encouragement for sports fans, plus they can often be good for reading activities for grandparents and grandchildren. For more information about All Things Possible, First Things First: The Rules of Being a Warner, or any of the other books about Kurt Warner out there, just click here. 🙂