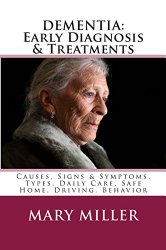 Dementia. A dreadful and dreaded condition that still has no cure, though there is more hope now than there used to be. Inextricably linked with Alzheimer’s Disease, yet that isn’t the only cause of it, just the most well known. There are several other conditions that can cause dementia, including Parkinson’s Disease, which a precious relative of mine dealt with for over 15 years. The dementia did not occur until the final year, although we saw glimmers of it in the last three years.

When he did reach the endstage of his disease and the dementia truly set in, I searched for books that could help us understand it, deal with it, and maybe even make some sense of it. I discovered several excellent ones. This was over four years ago and I’m sure there have been other good ones written since then.

One book that I read then that still stands strong in my mind and memory now was written by a man who was suffering from the early stages of Alzheimer’s Disease. It was like getting an inside look at it and it was fascinating, heart rending, and touching. Both Robert Davis and his wife were Christians (he was a pastor when he was diagnosed) and their perspective is one that I truly valued.

My Journey Into Alzheimer’s Disease by Robert Davis, is available at Amazon, both as a paperback and for the Kindle Book Reader. Robert Davis’ wife, Betty, cowrote parts of the book with him. It is excellent for giving you an insight into what each of them was going through. He describes his feelings and emotions, fears and frustrations. They also give ideas and tips on how to deal with a loved one who has this disease and what life is like for the spouse. They share the spiritual side of coping and the impact this disease had on their faith, as well as the impact their faith had on this disease. This is a book that is very easy to read. As difficult as the subject matter is, I found myself gratefully encouraged as I read it.

I must warn you, have plenty of tissue handy. I usually avoid books that make me cry, but this one provided blessed tears of relief and release as I could relate to so much of what I read. I have given this book away on more than one occasion, including to our church library, and highly recommend it.

My Journey Into Alzheimer’s Disease

Sheets – Read All About Them

Dental Relief for Caregivers and Their Families