2 Educational Toys and Games for Grandkids

My grandkids and I love to play! From freeze tag to Cranium Cariboo, from riding Razor Scooters to playing Pictureka, from Old Maid to Crazy 8s, we do have lots of fun with educational toys and games. And yes, I meant that word EDUCATIONAL to be there. You might not think of all these toys and games as educational, and yet they are. My grandkids are learning important character traits like good sportsmanship and how to share at the same time they are learning critical thinking skills and how to read numbers, not to mention how to balance well. 🙂

Two new games we’ve tried in the last couple of months are Bakugan Battle Brawlers and Sequence for Kids. After spending some time with both, I wanted to share our thoughts about them. Bakugan Brawl Board Game: My grandsons love Bakugan. When I spotted this game at Walmart, I recognized the name and stopped. The description on the front states, “A Game of Strategy & Intense Bakugan Brawling” and “5+.” The picture looked somewhat like chess or checkers. “WooHoo,” I thought. An interesting, critical thinking skills game that would be right up their alley. The timing was perfect since I would be babysitting them for a few days that week, so I purchased the game and brought it home. 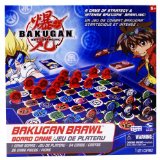 I made the mistake of setting it up while they were there. It’s always better to take it apart, set it up, and learn the game when you are alone, but my schedule hadn’t allowed for that. Still, we had fun putting it together. Then we worked through the rules. I don’t know who decided it was a game for 5 and up. My grandkids are quite bright but even the 7 year old didn’t really understand the concepts. It was even confusing for me! The game itself looks like it would be fun and interesting for an older crowd. But if you are looking for Christmas gift ideas for kids under 10, I can’t recommend it for them.

Sequence for Kids: Even though the front cover states it is for ages 3-6, this game has turned out to be great for my all my east coast grandkids, including their big sister of 13. She’d probably also enjoy the older kids’ version, but we’ve all had fun with this colorful game. I brought it with us for a long road trip, and it was great to play with one or two at a time each morning before the rest woke up. They have to get four chips in a row up and down, sideways, or diagonally.

There are two special cards – a UNICORN that lets you place your chip anywhere and a DRAGON that lets you remove your opponent’s chip from anywhere. The one hard part, that can be a bit difficult if you have younger children or if any of yours are on the autism spectrum or with certain learning disabilities, is the DRAGON card. We found it can be fairly frustrating, especially if the one losing the chip is almost at four chips to win the game. I wound up playing the game with each of my grandkids individually several times. We started off really easy. If I got the DRAGON card, I used it at the beginning of the game when it wouldn’t bother them. As we continued to play the game, I made it just a wee bit more challenging for them each time.

Eventually they have all reached the point where they are enjoying the game even when they lose a crucial chip at the end of the game. Overall, this game is entertaining, interesting, and fun – even for me. I also like that they are learning to deal with frustration in a positive manner. I highly recommend this game, and, for much older grandkids, its big brother, Sequence. The company also makes Sequence – Numbers – to help them learn to add and subtract and Sequence – States and Capitals – perfect for around 4th or 5th grade when they are learning those; and several other interesting sounding games. All in all, they are definitely fun for board game activities for grandparents and their grandchildren! I’m looking forward to playing it with my west coast kids next time I get to visit them. 🙂

Tags: Bakugan Brawl Board Game, Christmas gift ideas, Christmas gift ideas and gifts for kids, critical thinking skills activities for grandparents and their grandchildren, educational board games for children, educational toys and games, junior board games, razor scooters, Sequence board game for kids, the Sandwich Generation granny nanny dealing with the issues of caring for the elderly parents and babysitting grandchildren
Previous Post

Words of Encouragement for Grandkids And Grandparents